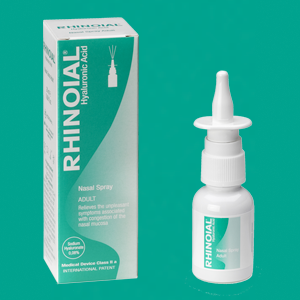 This film persists on the mucosa due to the natural mucoadhesiveness of hydrated high-molecular-weight hyaluronate, which has been further enhanced by adding glycerophosphocholine to give a really long-lasting hydrating and protective effect.

The special formulation of Rhinoial® is very gentle to the mucosa, and prolonged use does not lead to the typical discomfort that users may experience with products containing saline solution only.

When drugs are discontinued, symptoms usually reemerge, and worsen. This is called the rebound effect. This cannot happen with Rhinoial®.
Rhinoial®  does not produce any rebound effect.

Prolonged drug consumption for treating chronic conditions may have hazardous long-term side effects. This won’t happen with Rhinoial®.
Rhinoial® may be taken for a long time without any side effects.